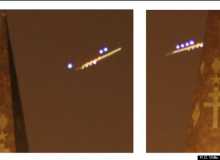 2011 was a good year for aliens…or at least for UFO sightings. According to the Mutual UFO Network, or MUFON, there was an increase of 67 percent of reported sightings of unidentified flying objects in 2011, as compared to 2008. That’s quite an increase.  Are more unusual occurrences, are people are paying more attention, or are they just not afraid to tell others what they’ve seen?

The Huffington Post has issued a list of the Top 11 UFO stories for 2011. The top 11 includes stories about previously confidential government papers, a petition sent to President Obama asking for all UFO information held by the White House to be released, and a road marker erected on the site of the most widely publicized alien abduction story in history which occurred 50 years ago.However, the story that made the number one spot on The Huffington Post list is the story about the New Orleans UFO. In October, during an NBC Sunday Night Football broadcast of the game between the Indianapolis Colts and New Orleans Saints, a cameraman caught what was widely considered to be a UFO.  In a live shot of the city outside the Superdome during the broadcast, an oblong object can be seen flying behind the famed St. Louis Cathedral towers.

When the video was slowed down and the oblong shape became more prominent, people speculated that the object was either bugs flying close to the camera, meteors, or a UFO. Since the video first prompted so much speculation, the NBC cameraman, R.D. Willis told the Huffington Post about the video. Willis said he took the footage with special time-lapse equipment, which gives the appearance of objects moving much faster than they really are. He said that the lights were nothing more than airplanes passing behind the cathedral tower. The long shutter exposure made them other-worldly.