According to the New York Times, Virgin Galactic is now selling tickets for space flights for $200K. The flights are scheduled to be this year and at this point just a little less than 500 people have booked seats on this momentous voyage to outer space.

“Hopefully by next Christmas, myself, my daughter and my son will be the first people to go up into space” on a commercial craft, Richard Branson, the owner of Virgin Galactic, said in a videotaped interview in November. $200K is definitely a bargain for such an amazing experience that should await a space tourist and Allianz has even lined up travel insurance for these wealthy space enthusiasts to purchase. 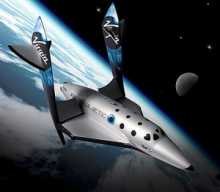 The passengers will experience five minutes of weightlessness during their two and a half hour flight. These travelers must go through three days of training for their voyage in New Mexico at Virgin’s Spaceport America before embarking on what will go down in history as the inaugural suborbital space tourism expedition. I expect the whole thing to be as impressive as Sir Richard Branson himself who has made having fun a feature of anything Virgin. I hear that passengers are offered a refund of their deposit too, so they have nothing to lose if they decide against it.

This is definitely the stuff of fantasy right now, but I wonder whether in twenty years it would become like scheduling a flight to New York City. For now, you can go see for yourself right here.