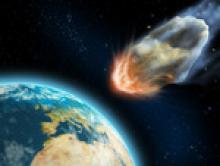 Kevin Yates of Britain is watching for asteroids. Maybe for a wandering planet too? If one unfortunately comes along?

65 million years ago, earth got smacked by a large piece of an asteroid and among other things the dinosaurs were obliterated. Scientists are saying, theorizing, that every one hundred million years such a planet disrupting asteroid comes this way, and thus another isn't due for thirty five millions years. Of course, the scientists could be wrong, couldn't they? One could be due next week, huh? Or one could drop in on us unexpectedly tomorrow morning, right?

I hope not. See the video.

Earth gets feather punched by pieces of asteroids called meteors almost all the time. Mr. Yates spends his days monitoring and tracking asteroids, and predicting when one may come this way. He has counterparts in this country and I'm sure in others.

The U.S. Space Command. and NASA also are watchful for known and unknown passing asteroids. The space command, which is part of the Air Force, is working on ways to defend the planet from dangerous asteroids.