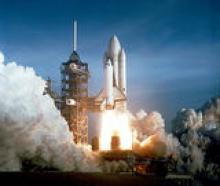 After taking a big hit from the imploded economy and several technical problems with the planned shuttle follow up, NASA (the National Aeronautics and Space Administration) was all but certain to see the end of the shuttle program and manned space flight; however, officials have been hard at work trying to come up with a plan to save the space program and to keep the shuttle out of retirement.

The new plan from the NASA Oversight Committee would stave off the planned retirement of the space shuttle and build a new US based launching system. The plan would be funded in part by the historic change of undertaking commercial development for a space taxi program in partnership with the private sector. The move would save the space shuttle program which has been one of the staples of the NASA program since it became a focal point in the 1970's and 1980's.

So what will this mean for the future of NASA and space flight? Currently, the arrangement that was passed by the Senate Committee on Commerce, Science and Transportation will allow for one additional flight sometime next year to the International Space Station and while it had intended to retire the shuttle and cancel flights, it will leave the infrastructure and personnel in place for an additional flight should the need arise. Additionally this new plan will allow for a new vehicle and capusle. The heavy launch vehicle will come equipped with a capsule and will be designed to transport astronauts to various locations in deep space such as asteroids which could open up an entirely new chapter for space exploration. Both would rely heavily on already well established NASA programs including the existing shuttle program as well as the Constellation Moon program that is on the current administration's hot list for discontinued programs. Work on the new heavy lift space rocket is scheduled to begin sometime in 2011.

Because of the addition of using the private sector to help pay for NASA programs, much of the federal funding originally proposed by the Obama administration has been reduced. For example, the original $6 billion that was requested to develop commercial space flights over a 5 year period of time was reduced to just $1.6 billion over three years. The new plan also keeps intact the yearly funding for the International Space Station and the original sum for scientific study and unmanned space exploration that has been a crucial part of the NASA program.

The new plan will go along way towards insuring the future of NASA and American space exploration without making an even bigger dent in the national economy.


Solar Tsunami Is Heading Our Way