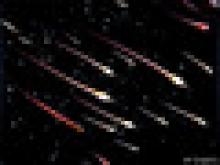 If one needs proof of the existence of Heaven, one only needs to look to the Internet. If the gods did not invent the net, then who did? I am talking of the web and all that comes with it: Chat and video file sharing, email and of course Twitter. Does one need specifics? Well -- last night (Aug 12th), the annual Perseid meteor shower, which as the AP video shows lit up the sky and Twitter.

"Meteor watchers logged on to tweet as the annual Perseid meteor shower reached its peak," sharing the communal experience. NASA astronomers calculated that at least 80 meteors per hour were visible during the peak display. Twitter had what? 80 zillion meteor watchers tweets?!

The web -- the almost instant connection that it provides to watchers, gazing from thousands of points under the night sky, giving a wide community of watchers the opportunity to share, not only what they see, but what they missed, and what to watch for, is to borrow the phrase, "truly priceless."