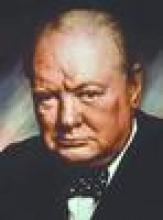 The British government has released a new batch of its once secret UFO files. Among the revelations revealed today is that Winston Churchill covered up reports of UFO sightings, so not to cause mass public panic.

So all those recent "Dr. Who" episodes with the late Sir Winston paling around with the good doctor may have been inspired by a little more than the muse of fiction.

Most of the reported UFO sightings, the Brit government files say, were misidentified objects, normal terrestrial and / or pedestrian things like aircraft lights or meteors, and yes, as always, a small proportion of the sighting could not be explained.

Nick Pope, the former MoD UFO chief, who worked for twenty five years at the British Ministry of Defense, says these latest reports prove that something is really out there. Aliens? Visiting us? He says, he doesn't think so. And he believes there's is alien life. He hedges.

Well, no aliens have formally checked in -- yet, as far as the public knows. See the videos.

The new Brit UFO files are on-line at  nationalarchives.gov.uk/ufo, and can be viewed, download, for free, for the first month. After that there will, what the site says, a small fee. The first batch of Brit MoD UFO files can be assessed for the fee.


Solar Tsunami Is Heading Our Way